Buckwheat has been grown in places where other plants won't grow for centuries. Peasant folk who live in the mountains will toss handfuls of buckwheat groats up onto rocky hillsides, because the grain will fall into bits of soil which have accumulated in crevices and buckwheat plants will sprout up.

Because I transport garden soil from one place to another, I get buckwheat "volunteers" in all kinds of interesting places, from seed which dropped off the plant onto the ground. When the dirt got moved, so did the seeds.

I was pulling weeds in the side yard recently, and discovered two different buckwheat plants growing where the driveway has cracked apart and soil has settled in. One was right in the driveway and one was along the edge, where some weeds had also found a home.

I love to find these plants, which even when small can have 20 seeds on them. One seed multiplied to twenty is a good return, especially since they aren't plants I ever did anything to establish! 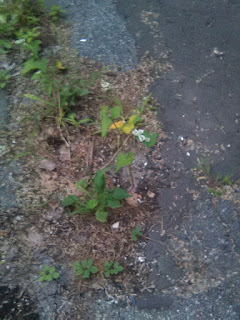 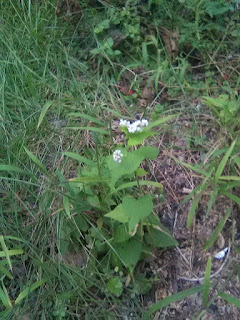 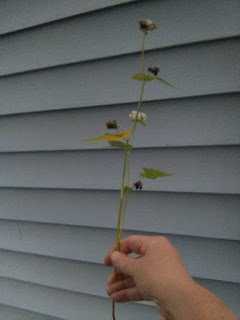 Posted by Marion Garbo Seltzer at 6:34 PM No comments:

I didn't grow this in the watering can. When I move garden soil around in the yard, some seeds travel with the dirt and become volunteers. I pulled this plant out of the basin of an old porcelain sink I fill with geraniums. I needed somewhere to plonk it until I could harvest the groats and this watering can was handy. 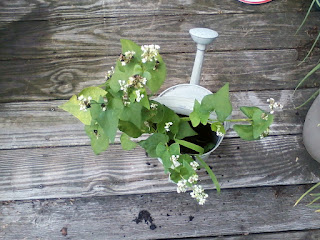 Posted by Marion Garbo Seltzer at 6:37 AM No comments:

Buckwheat Kitchen Garden is obviously not the only source for information about buckwheat. Here are a couple other links which may interest you:

"It's Better With Buckwheat"

Posted by Marion Garbo Seltzer at 10:13 AM No comments:

Birkett Mills, which manufactures Wolff's Kasha and other buckwheat products plus wheat-based foods, used to publish booklets full of recipes. Here we are in the Digital Age and the information is now on a website. 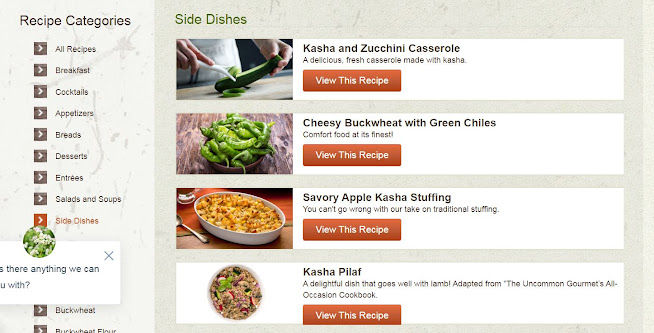 Posted by Marion Garbo Seltzer at 10:09 AM No comments:

Buckwheat has been used as both food and medicine by people all over the world. Because there are different varieties of buckwheat, the taste of each tea will vary, as well the part of the plant used, how long it steeps, and for what health issue(s) it was drunk.

In the American West the Hopi people used "crispleaf" buckwheat to make tea, as well as Calfornia buckwheat. This brief article gaves more information.
Posted by Marion Garbo Seltzer at 12:50 PM No comments:

A discount store with several grocery aisle carries these soba noddles. There are four small servings in a packet and I usually cook up two at a time. The package is less than a dollar-fifty. The noodles are good, and instead of a chemical packet of flavorings, I add tamari and/scallions and/or peanuts, etc. 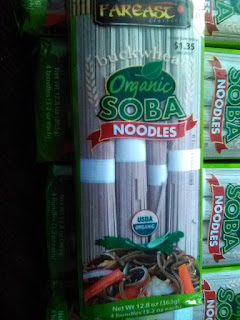 Posted by Marion Garbo Seltzer at 11:59 AM No comments:

I like to plant specific types of buckwheat in different areas, in order to evaluate which seeds do better where. I know it's mostly common buckwheat, but some sellers collect and store the seeds in different ways, and some of it I don't really know the age on.

I had a baggie with some "scrap" bnckwheat seeds and chaff in it -- Sometimes seed I sowed comes up long after I planted it, and I get a little "surprise" crop. So that's where this seed came from, and I decided to sow it in a white plastic pail with draining holes drilled in it. I'm enjoying looking at the cloverlike foliage. We'll see if it flowers and makes seed. I did move it away from the back door to the other end of the deck, as some bees were alrady arguing with me about whose buckwheat it is.

I'll take more photos as the plants develop and post them here on the blog. 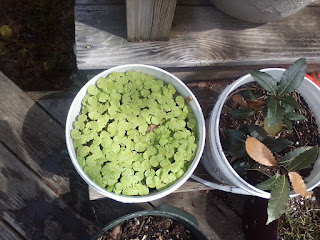 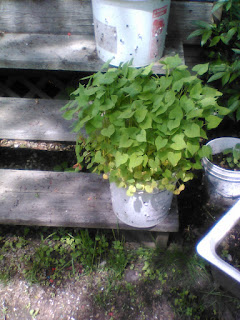 Posted by Marion Garbo Seltzer at 9:24 AM No comments: